Vaslav Nijinksy and the Ballet Russe 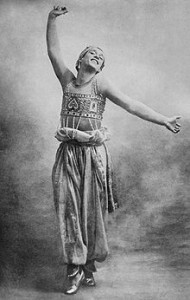 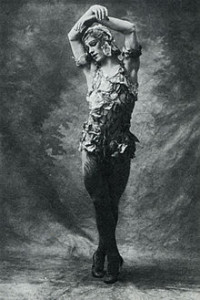 It was during the frenzy of the Coronation year of George V in 1911 that brought Nijinsky, star of the Ballet Russe, before the British public. On June 21, the night before the Coronation, the Royal Opera House at Covent Garden was packed with London’s haut mond. In between the tiers to the boxes were banks of roses. Silk roses had to be incorporated to prevent the delicious scent from completely overpowering the exquisitely dressed and diamond laden who took their seats in anticipation of this much publicized ‘event.’

The first half of the ballet did not go quite as hoped. Sergei Diaghilev the director for the Ballet Russe was almost overwhelmed by a procession of elderly dowagers covered in diamonds ‘as if they were icons’ who took their places in velvet lined boxes. Prune-faced with disapproval, during the interval, they were loud in their exclamation of disgust: ‘this wasn’t dancing; this was a barbarian horror. It’s just savages prancing about.’ Never was British sang froid at its most tepid as the illustrious crowd sat upright in their seats and clapped lightly with gloved hands as they chattered amiably about foxhunting.

But cross old dowagers apart, no one was prepared for Nijinsky in his harlequin tights: ‘Every jump is a separate ecstasy,’ exclaimed the Times the next day. And from the Daily Mail: ‘little less than a revelation…the amazing Nijinsky bounding into the air with the light joy of a Mercury with winged heels, created moments of the most alluring novelty.’ Ballet it seemed would never be the same again and a new sensation had been discovered.

The sets and costumes designed by Bakst for the ballet were equally enthralling: brilliant savage colors of blue, scarlet, emerald-green and pink. Overnight the careful preference for pastel pink and lavender in women’s fashion disappeared and the department store Harvey Nichols threw out its summer collection featuring white and cream and hung everything in purple and red. It became fashionable to lounge in a boudoir made over to look like a Turkish seraglio in a pair of sheer chiffon, baggy scarlet pants suffocating in an atmosphere of incense. The Ballet Russe had even revitalized color.

For many the Ballet Russe combined power, freedom and unrestrained beauty and London was spellbound. A new cult formed and many went to the ballet night after night, sending massive baskets of flowers backstage to Nijinsky and flooding him with invitations.

The added delight for these new and fascinating fans was that Nijinsky was rumored to be tremendously debauched. One story circulating was that he had accepted a belt of diamonds and rubies from an Indian prince after they had spent an evening together after the ballet. In one ballet Nijinsky wore a skin colored silk tricot, which clung so tightly to his athletic body it revealed every muscle and sinew, and onto which was sewn hundreds of red and pink silk rose petals for his solo in Le Spectre de la Rose.

In response to the often asked question about how he achieved his effortless leaps, where he barely seemed to touch the ground in between each one, Nijinsky was heard to answer quite seriously. When he was six his father had decided to teach him to swim and had thrown him into the Wisla River in Poland, it was winter at the time. As the boy sank to the bottom of the river’s freezing and turgid water he saw a shaft of light penetrating down through the murk from above and found himself possessed of a tremendous physical strength that enabled him to leap upward from the muddy bottom and burst through the surface of ice and water. He explained that in a similar fashion he had made the air his medium: ‘It is very simple,’ he said. ‘I jump and sort of stop in the air for the moment.’ Naturally, he was invited everywhere, and everywhere he went he was escorted by his manager, lover and director of the Ballet Russe Sergei Diaghilev.

Undoubtedly as a dancer and performer Nijinsky was astonishingly talented, but his style of choreography took ballet to another form of expression altogether. The early part of the 20th century saw great changes in the form of art, literature and music, but undoubtedly the Ballet Russe was the most vibrant; a physical manifestation of new ideas incorporating movement, music, color and performance and of self-expression.