The Blackout and the Dark of Night 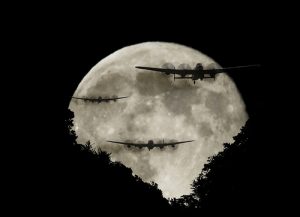 To make it difficult for the German Luftwaffe (air force) to locate built up areas, the British government imposed a complete blackout during the years of WWII. The occupants of all buildings had to ensure they did not leak light that would give clues to German pilots that they were flying over inhabited areas. Even the flare of a lit match or the glow of a cigarette could be spotted from above. 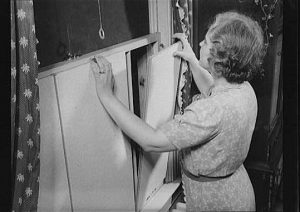 Thick black curtains or blackout paint were used to keep windows dark at night. Shopkeepers, hoteliers, restaurant owners and publicans had to black out their windows and provide a means for customers to leave and enter their premises without letting light escape—they risked a formidable fine and even the loss of their license if they were not in compliance. 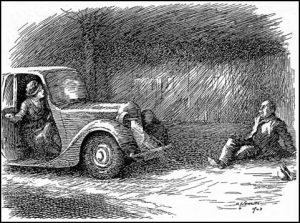 “Oh Good heavens. I simply didn’t see you there!”

Britain’s streets were not lit at night and motor vehicle headlights, bicycle lamps and flashlights were fitted with blinkers so that their light was cast downward.

The Air Raid Precautions (ARP) was run entirely with the aid of civilian volunteers. Their primary task was to protect civilians from the very possible danger of air raids. 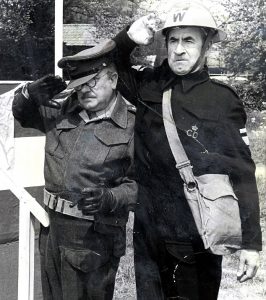 It is important to take your job seriously.

As the war  years dragged on, there were some areas that saw little or no bombing raids, and local air raid wardens took on the distinctly irritating presence that we often feel toward traffic wardens today when they give us a parking ticket.

My mother’s family lived in rural Buckinghamshire, surrounded by the dark  acres of her father’s farm. Their local air raid warden was an officious woman who biked around the village issuing warnings and writing tickets for the slightest offence. 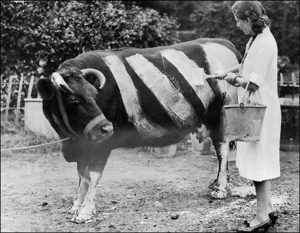 The center of streets, the curbstones and large animals were painted with luminous paint.

One night there was a tremendous crash outside of their house. The family discovered the ARP warden, Mrs. Crombie, lying tangled up in her bike at the bottom of a ditch. She had run into a large and very frightened cow that had wandered into the lane at the bottom of their drive. My grandfather helped Mrs. Crombie to her feet; my uncle fixed her puncture and my grandmother made her a cup of tea, as Mrs. Crombie wrote them a ticket for endangering the roadways of Buckinghamshire with an ‘unmarked’ cow. 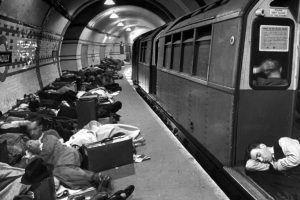 Londoners sleeping in the underground during an air raid

ARP wardens patrolled the streets during the blackout to make sure that no light was visible. They also helped firemen and ambulance workers search for people buried in the rubble of bombed buildings; reported on the extent of bomb damage to their local authority and issued gas masks and pre-fabricated air-raid ‘Anderson’ shelters from their command post.

When the air raid warning siren sounded ARP wardens were responsible for helping civilians to the nearest shelter—the London the Underground was often the nearest and safest place to spend the night during the Blitz. During the war years there were 1.4 million Air Raid Precautions warden volunteers working part-time in Britain.