Sir Thomas Beecham and the Importance of Starting, and Finishing, Together

There are two golden rules for an orchestra: start together and finish together. The public doesn’t give a damn what goes on in between. —Sir Thomas Beecham 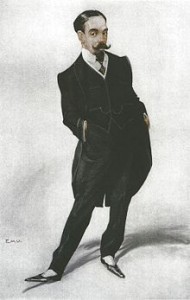 Beecham’s grandfather, also Thomas Beecham, was the rich industrialist who owned Beecham’s Powders, a laxative and cure-all for headache and stiffness of the joints.

In 1899, Hans Richter, due to conduct the Hallé Orchestra in a concert in St Helen’s, fell ill; Thomas’s father, Joseph Beecham, who was the mayor of St Helen’s, declared that his prodigiously talented 20-year-old son should step in. From there, the young conductor – entirely self-taught – moved on in leaps and bounds. 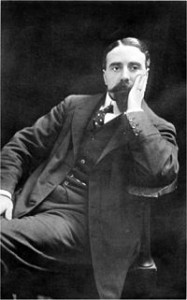 Sir Thomas, who was extraordinarily handsome and possessed of a stupendous ego, bankrolled his Beecham Symphony Orchestra in 1909 and the Beecham Opera Company in 1915. He was also the impresario of His Majesty’s Theatre and the director of the Royal Opera House.

Thomas Beecham with Maud, Lady Cunard, the fundraising Britannia of Covent Garden and his mistress

Musically gifted though he was, he was perhaps more famous for his rapier wit. Once he described the sound of the harpsichord as “two skeletons copulating on a tin roof”; on another occasion he declared that “the British may not like music, but they absolutely love the noise it makes”. His pointed goatee beard, his proud and portly stature and, most of all, that dry, acerbic wit have passed into musical mythology. 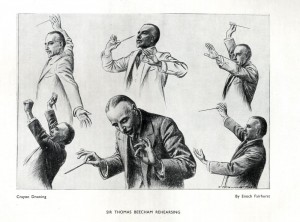 Sir Thomas Beecham in middle age –giving it his all.

But Sir Thomas demanded the very highest standards from his players. He once noticed that his leading cellist was not striving for the perfection required of her. He brought the music to a halt and said to her, in front of the entire orchestra, “Now, madam, you have between your legs an instrument capable of bringing pleasure to thousands and all you can do is scratch it!”

Brass bands are all very well in their place – outdoors and several miles away.

Sir Thomas, Lady Cunard’s lover for many years, was often unfaithful to her as he was so irresistible to women. When his wife died after many years into their marriage Lady Cunard confidently expected Sir Thomas to marry her, but he abandoned her in favor of a much younger woman. 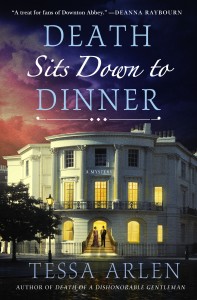 Although “Sir Thom” as he is referred to by Lord and Montfort in DEATH SITS DOWN TO DINNER only has a walk on part –with no lines — they enjoy telling stories about some of his more eccentric adventures with Lady Cunard.

This entry was posted in Entrepreneurs, Performing Artists, Socialites, Uncategorized. Bookmark the permalink.