Mrs. Jackson and the Lancashire Witches

On All Hallows’ Eve downstairs in the servants’ hall at Iyntwood the maids light their turnip jack o’ lanterns and settle down with their cider and toasted nuts casting hopeful looks at the housekeeper to see if she is in the mood to tell them a story.  And Mrs. Jackson –who comes from Lancashire –does not disappoint, because natives of that county know a thing or two about witches and have learned the hard way that it is best to be polite if they come across one of them. 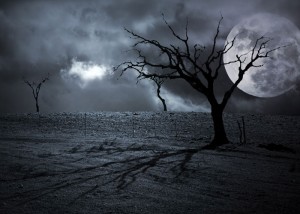 “Are you sitting quite comfortably?” she asks the youngest housemaids in her soft Lancs accent, meaning they must not fidget . “Then I will begin. Long, long ago there were three covens of wild witches scattered throughout the moors and woodlands of Lancashire: the Pendleton, Demdike and Hedgerow witches they were called. Four times a year, these three witch families got together to celebrate the festivals of Samhain, Beltane, Imboc and Lammas on Malkin Hill in an ancient stone tower on the edge of the Lancashire moors.

They had a fine old time of it, they swapped recipes for their best spells, drank a lot of good strong cider, Scrumpy is another name for it, and once they even managed to conjure up a strange looking beast that bore a passing resemblance to a goat with long black shaggy hair that walked on two legs. 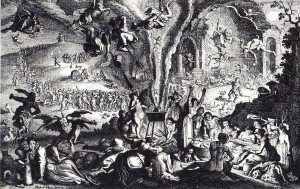 The villagers in the area feared and respected these witches, who should not be confused with wise-women and herbalists –what we sometimes call White Witches –any more than you would confuse a tabby cat with a tiger if you ever came across one. Their magic was fearfully strong and if someone from a nearby farm or village were was stupid enough to cross a witch, and I mean literally to make the sign of a cross if they saw one, then woe betide them. For everything they possessed from their sheep dog to their prize heifer would perish. But witches like to keep to themselves so all was peaceable enough for the most part.

Oliver Cromwell Lord Protector of the Commonwealth of England, Scotland and Ireland.

Then came the dark days of Oliver Cromwell, Old Ironsides as he was affectionately referred to. He split the country in two, executed the king and appointed himself Lord Protector of England. His rule was a strict one; he took a dim view of singing, dancing, theater and witches both tame and wild, and he was determined to rid England of magic once and for all. As is usual in the ways of mankind it turned out to be a thoroughly botched job. Many decent women, herb-wives or lonely half-mad old widows, were condemned to die as witches in those terrible times. And inevitably the day came when the whole witch-hunting business took a nasty turn for the worse. 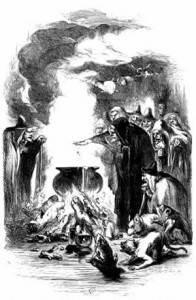 Billy Norris was herding his sheep to market when he came across a common or garden Hedgerow witch. She was down in a ditch gathering Deadly Nightshade berries to make flying ointment for the winter. Each coven had its own recipe for flying ointment and every autumn they made masses of the stuff to last them through the winter. 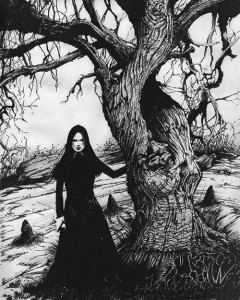 Billy Norris stopped dead in his tracks when he saw the witch standing knee deep in stinging nettles. He tried to sidle past her, but he was so nervous he scared one of the sheep across the lane and without his dog, who was cowering behind a tree, to nip it back into the herd it trampled the basket of berries at the old girl’s feet. She swore at Billy using quite appalling language and what was left of his nerve deserted him completely. He lost his head and made the sign of the cross. The witch, her name was Batty Heller, lifted an extraordinarily long middle finger and pointed straight and true and then melted into the hawthorn hedge and disappeared. 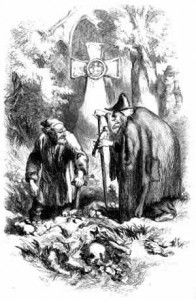 The next day every one of Billy’s sheep died. Two days after that his dog had a fit and died and as Billywas standing at the pump filling a pail of water he fell to the ground paralyzed, his hair stark white. Two days later a villager stumbled on Batty Heller in a graveyard cutting down branches of hemlock, and the day after she was seen digging up Monkshood roots in someone’s garden. The villagers decided that they had had enough. 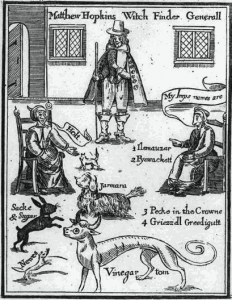 They went to the local constable who got on his horse and rode into Lancaster to report that there was a dangerous witch at large down Demdike way. Without hesitating the chief constable sent for  Mathew Hopkins, the Witch Finder General and this is when things got out of hand. The Witch Finder arrived within the week with a large force of men carefully trained to search out witches.

They herded up nearly forty women, most of them innocent old crones, but among them was a particular ugly old boot whose name was Alizon Caxxon. There were plenty of villagers ready to swear that they had seen Alizon flying over the moors, upside down, on a great brown toad. And poor old Alizon was put to the question.

The things they did to Alizon Caxxon are too terrible to relate. And with you young girls already so scared I will just leave you to imagine the worst and when you have, double it and still you won’t come up with the sort of cruel things they did to the poor wretch. 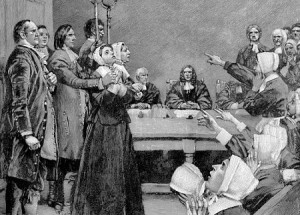 She confessed to witchcraft of the worst kind, to curses and conjuring, and finally broken she admitted to disturbing Christian graves. With a bit more ‘questioning’, she coughed up the names of Gertie Gallavantz, Batty Heller, the beautiful Esmeralda and Square Betty, and finally she gave them Old Demdike.

The Witchfinder General sent his men to lie in wait at Malkin tower at the next full-moon and the following morning they brought all five women in and stowed them away in the dungeons at Lancaster Prison. When they found Old Demdike her familiar Marmaduke, a large and particularly angry black cat, scratched and bit three men before he ran yowling into the night as they wrestled the old dame to the ground. Thanks to Marmaduke’s long yellow teeth their bites turned septic giving further proof that the old lady was a witch.

Word went out that for once six real witches were to be burnt at the stake on the next market day in Lancaster. The people poured in from every village around. They bit into toffee apples, scoffed down hot apple fritters and drank cider, for it was October and the day before All Hallows’ Eve. Then a great mob of them waited for the witches to be trundled out in chains from the prison, dragged up onto the towering bonfires and tied to stakes. 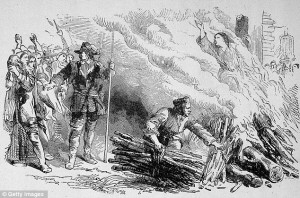 The fires were lit and the flames leapt into the night sky making it as bright as day in the town square. The witches began to shriek and the simple country folk jeered and threw whatever they could lay their hands on at them. Then Old Demdike lifted up her voice over the roar of the flames and cried out a long and complicated backwards blessing –what witches sometimes call a curse. It was a blood chilling sound and in that moment the square went completely dark and the night became bitterly cold. Seconds passed, the night grew blacker still, and the crowd crouched low to the ground, whimpering in fear. Still blacker and no one could see a hand in front of their face, but they could certainly hear Old Demdike as she screamed out her curse over the crackle of flames the people could no longer see: Ouy peek dna ouy ssleb drol eht yam, ouy nopu enish ot ecaf sih ekam dna (which you might understand if you hold this up to a mirror)

When her voice and those of her sisters became silent the darkness faded and the flames rekindled and leapt up higher and brighter than before as cloud after cloud of bats lifted up out of the fires and flapped up into the night sky. 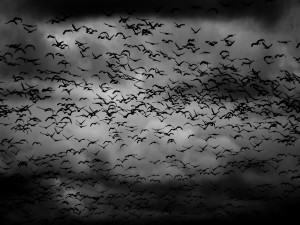 For the next three days and nights the skies poured rain thick with soot, a plague of toads climbed out of village pumps and wells until the ground was covered with them, cattle stopped eating and died, and no one dare leave their cottage after dark because of the terrifying apparitions that raced across the night skies. And when all was over and the bravest of witch finders climbed Malkin Hill they found that the tower had been split in two by a great bolt of lightning. 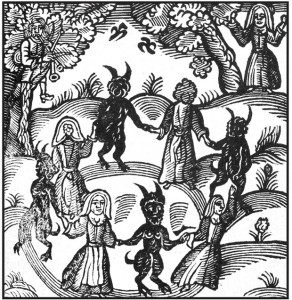 And the rest of the Lancashire witches lucky to avoid capture? They disappeared, driven deeper into the moors and the forests and were only glimpsed on All Hallows’ Eve as they flew through the night sky to Malkin Tower. And if you are foolish enough to be out after sunset on this night and look up and see a witch flying upside down on a toad whatever you do, look down!”

Note: Lancashire had more witch trials than any other county in England during the Witch Finder General’ time. I stole the witches’ name from Lancashire folk lore. But Mrs. Jackson swears that every word of this story is true!

This entry was posted in Characters in fiction. Bookmark the permalink.