Lucile, Lady Duff-Gordon and the Dress of Emotion 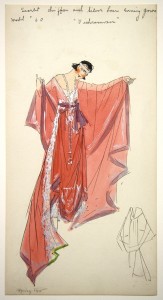 Lucile, Lady Duff-Gordon is possibly more infamously known for the scandal surrounding her escape from the Titanic in an almost empty lifeboat with her secretary and her husband Sir Cosmo Duff-Gordon. The three of them were among twelve people in a boat that could have packed in at least forty. Criticism after the disaster suggested that Sir Cosmo boarded the emergency boat ignoring the chivalrous ‘women and children first,’ code, and the Duff-Gordon’s life boat failed to return, after the Titanic sank, to rescue those still struggling in the water. What made matters more complicated was that Sir Cosmo had generously offered the crew in his life boat compensation, a gift of five pounds apiece, to replace the kit they had lost when the boat sank. After a protracted court-room session the British Board of Trade’s inquiry into the disaster accepted Sir Cosmo’s denial that he had offered a bribe, as there was no evidence to the contrary, but Duff-Gordon never quite recovered from the scandal.

Lady Duff-Gordon, however, was made of far sterner stuff. Unlike her husband she did not retire crushed by public opinion from society. She displayed the same strength of purpose and entrepreneurial focus that had helped become the most successful English dress designer of the early 1900s, and the owner of Maison Lucile, an internationally famous brand of its day in London, Paris and New York.

Left a near-penniless single mother and divorcée by the collapse of her first marriage, Lucile Wallace began her fashion career cutting out dresses on the floor of her house and then using her connections in society built a list of clientele that represented the rich and titled wives of the aristocracy. The super-rich wives of the arriviste flocked to her salon for her dresses and her instruction on how to walk, dress, act and speak as if they had been born to the privileged life their husbands’ had acquired. She dressed society’s matrons, their daughters and their husband’s courtesans. In later life she said she believed her success was due to her instinctive ability to design a gown to suit the personality of its wearer. Her versatility as a designer was boundless: she designed seductive tea-gowns, dainty little dresses for debutantes and sophisticated models that looked like the last word in wickedness. And when she had all of society coming to her salon for their gowns and dresses, she designed a line of lingère that made their husband’s eyes pop!

These were the days of the great courtesans for whom men ruined themselves, the days when a man would order a thousand guinea sable coat as a peace offering to his mistress after a slight quarrel. Dressed in soft, flowing tea gowns, with no corsetry to obstruct the business of undressing, women discarded the cumbersome underclothing of Victorian and early Edwardian era for flimsy delicate little nothings made of sheer silk and lace especially created for the fashionable hours of cinq a sept, when married women entertained their lovers.

Maison Lucile’s fitting rooms in Hanover Square were part of a luxurious private house furnished in classic style where Lucile’s clients could relax in elegant rooms carefully strewn with lovely accessories to complement the clothes she had made for them. The lingère boudoir had an ornate gilt bed, once owned by Marie Antoinette, to give the right atmosphere for choosing pretty underclothes and diaphanous sleepwear.

And it was from these pleasant afternoons that the idea for the fashion show was born. For Lucile’s was the first house in London or Europe to use a live mannequin in a fashion parade; Lady Duff-Gordon invented the catwalk. Most of her mannequins were working girls each picked for her startling good looks. Lucile taught her girls to walk with unhurried grace and languid poise; she rehearsed them until they were perfect. Then she designed gowns for them, gowns that complemented their individual physical characteristics as well as their personalities.

Once she had created her season’s collection, she went about setting the right scene for her fashion parade. The lighting was romantic, but clear enough to be able to see her girls; the epitome of voluptuous glamor, demure grace, or languid beauty, as they modeled the clothes on a miniature stage with misty olive chiffon curtains. She created what she called ‘gowns of emotion’ and gave each a luscious and evocative name: “When Passion’s Thrall is Over,” “Red Mouth of a Venomous Flower,” and best of all: “The Sighing Sound of Lips Unsatisfied.”

And when all was ready, she sent out pretty invitation cards, keeping the illusion that she was inviting friends to a party at Hanover Square house. Within six months of starting her fashion parades Lucile doubled her clientele, and nearly trebled her revenue.

This remarkably temperamental and dynamic woman thrived at a time when it was unacceptable for the upper classes to earn an income from trade, unthinkable for a lady to make her own living. In 1900 she married Sir Cosmo Duff Gordon, landowner and sportsman. But despite marriage to a baronet she could never be presented at court because she was not just a successful business woman, but a woman who had worked to become one. She opened salons in New York and Paris and took business away from the top fashion houses in Paris; designed theatrical costumes for the stars of the day; wrote a fashion column, and became confidante to society’s elite on both sides of the Atlantic.

She was on her way to her salon in New York when the Titanic collided with an iceberg sending over 1,500 souls to the bottom of the sea. But she survived and continued to create exquisite clothing, her salons flourished and her business grew. The beginning of the Great War in 1914 put a temporary halt to the extravagance of haute couture and when the war ended the new fashions were a far cry from Lucile’s wafty, delicate dresses and her popularity as a designer diminished.

This entry was posted in Entrepreneurs, Socialites. Bookmark the permalink.