DEATH OF AN UNSUNG HERO

Volume 4 in the Lady Montfort series from Minotaur Books 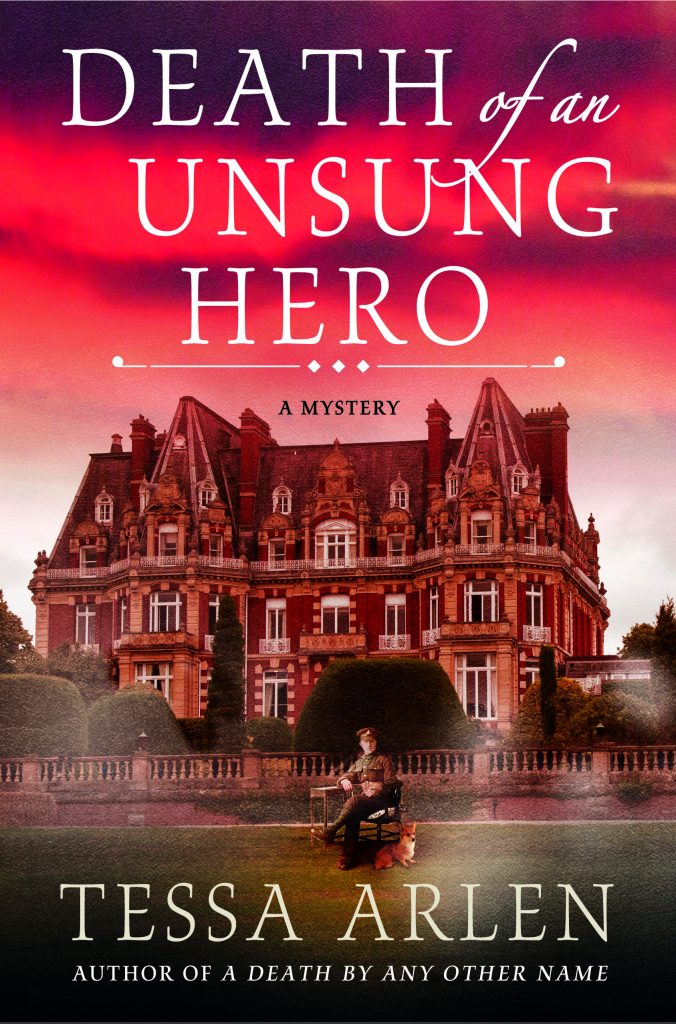 Lady Montfort and her pragmatic housekeeper Mrs. Jackson investigate a murder of a WWI officer with amnesia in the 20th-century English countryside.

Building on the success of her last three mysteries in the same series, Tessa Arlen returns us to the same universe in Death of an Unsung Hero with more secrets, intrigue, and charming descriptions of the English countryside.

In 1916, the world is at war and the energetic Lady Montfort has persuaded her husband to offer the dower house to the War Office as an auxiliary hospital for officers recovering from shell-shock with their redoubtable housekeeper Mrs. Jackson contributing to the war effort as the hospital’s quartermaster.

Despite the hospital’s success, the farming community of Haversham, led by the Monfort’s neighbor Sir Winchell Meacham, does not approve of a country-house hospital for men they consider to be cowards. When Sir Evelyn Bray, one of the patients, is found lying face down in the garden with his head bashed in, both Lady Montfort and Mrs. Jackson have every reason to fear that the War Office will close their hospital. Once again the two women unite their diverse talents to discover who would have reason to murder a war hero suffering from amnesia.

“The fourth entry by Arlen has enjoyable touches of whimsy… more satisfying than the typical country-manor murder.” ―Kirkus Reviews on Death of an Unsung Hero

Print copies are available now for pre-order at Amazon and Barnes & Noble or from your local indie bookstore:

A Death By Any Other Name

Volume 3 in the Lady Montfort mystery series from Minotaur Books 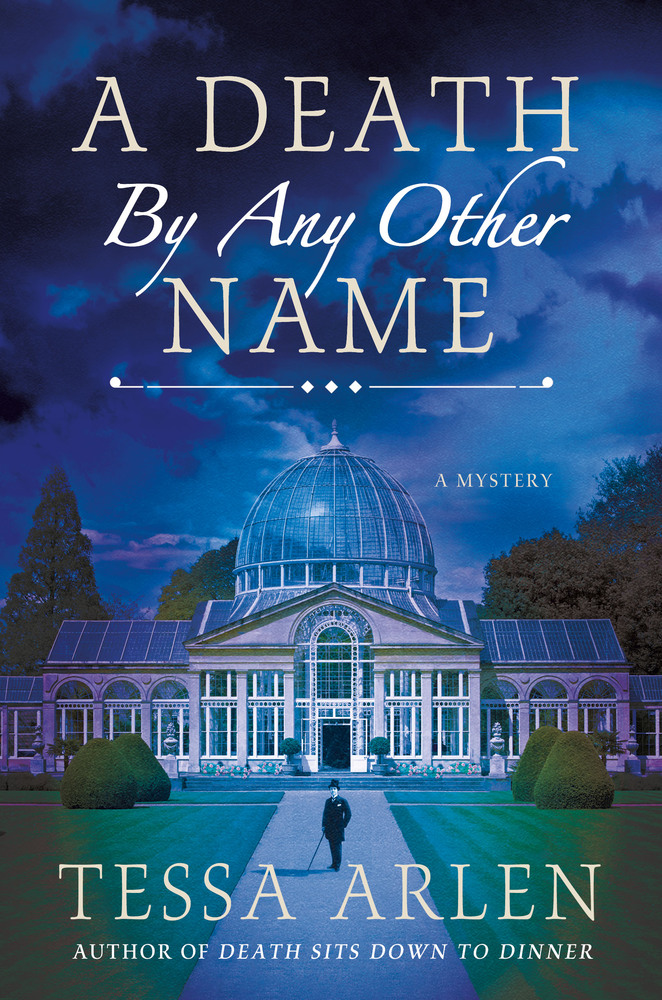 Building on the success of her last two mysteries in the same series, Tessa Arlen returns us to the same universe full of secrets, intrigue, and, this time, roses in A Death By Any Other Name. The elegant Lady Montfort and her redoubtable housekeeper, Mrs. Jackson, investigate a murder among a group of amateur rose-breeders while the idyllic English summer days count down to the start of WW1.

When Mrs. Jackson receives a visit from a cook who believes she was an indirect witness to murder from a poisoned dish of breakfast kedgeree Lady Montfort promises to do what she can to clear the cook’s name, and contrives an invitation to Hyde Castle, to the castle of a self-made millionaire, to investigate a murder of concealed passions and secret desires. With the help of the invaluable Jackson, Lady Montfort sets about solving the puzzle surrounding the death of the society’s most popular member and discovers a villain of audacious cunning among a group of mild-mannered, amateur rose-breeders.

While they investigate, the headlines bring news of the continuing conflict in Prussia following the assassination of the heir to the Austrian empire. As each day brings more threatening news and the very real fear that Britain will be drawn into war Lady Montfort and Mrs. Jackson must race the clock to solve the mystery before Britain declares on Germany.

Brimming with intrigue, Tessa Arlen’s latest does not disappoint.

“Poisoned kedgeree is an unlikely murder weapon — but not in “A Death by Any Other Name” the third in Bainbridge Islander Tessa Arlen’s engaging series about Lady Montfort and her down-to-earth housekeeper, Mrs. Jackson . . . Bonus: a charming supporting performance by the famous real-life garden designer Gertrude Jekyll.”  – Adam Woog – Seattle Times

“Arlen recreates a richly detailed pre-WWI England, seamlessly weaving historical events and people into her well-written third Lady Montfort mystery A DEATH BY ANY OTHER NAME (after 2016’s Death Sits Down to Dinner). . . .Lovers of traditional English country house mysteries will enjoy this story very much. ” – Publishers Weekly

“Arlen’s delightful mix of upstairs and downstairs conveys the complexities of a hidebound class system on the verge of change. . .  The narrative is helped along by a slew of red herrings, a fast-moving plot, and fine descriptive passages.” – The Historical Novel Society

“This pitch perfect classic whodunit beautifully captures that brief moment when the world waited to hear whether war may be averted. Tessa Arlen’s observations of her characters and the intricacies of the English class system are conveyed with sparkling insight and wry humor. . . It’s a delight to be in the company of two such captivating sleuths.” — Frances Brody, author of the Kate Shackleton mysteries

Death Sits Down to Dinner 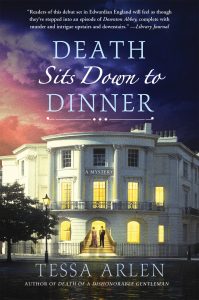 “Arlen conveys a genuine feel for Edwardian life in a grand manor house and takes the opportunity to exploit amusingly snobbish exchanges between the guests.” – Historical Novel Society

Filled with deceptions both real and imagined, Death Sits Down to Dinner is a delightful Edwardian mystery set in London.

Lady Montfort is thrilled to receive an invitation to a dinner party hosted by her close friend Hermione Kingsley, the patroness of England’s largest charity. Hermione has pulled together a select gathering to celebrate Winston Churchill’s 39th birthday. Some of the oldest families in the country have gathered to toast the dangerously ambitious and utterly charming First Lord of the Admiralty. But when the dinner ends, one of the gentlemen remains seated at the table, head down among the walnut shells littering the cloth and a knife between his ribs.

Summoned from Iyntwood, Mrs. Jackson helps her mistress trace the steps of suspects both upstairs and downstairs as Hermione’s household prepares to host a highly anticipated charity event. Determined to get to the bottom of things, Lady Montfort and Mrs. Jackson unravel the web of secrecy surrounding the bright whirlwind of London society, investigating the rich, well-connected and seeming do-gooders in a race against time to stop the murderer from striking again.

Praise for DEATH SITS DOWN TO DINNER:

“Clementine has a head on her shoulders . . . [and is] as cagey as she is charming. A neatly crafted whodunit dripping with diamonds, titles and scandal.” Kirkus Reviews for DEATH SITS DOWN TO DINNER Read full book review here.

“The close, mutually respectful partnership between Clementine and Edith will remind Dorothy Sayers’s fans of the relationship between Lord Peter Wimsey and Bunter, his manservant. Arlen does a good job of depicting a period when class distinctions have become blurred by new money and more-relaxed manners. The plot, which includes a slew of red herrings, builds to a startling denouement.”  Publisher’s Weekly for DEATH SITS DOWN TO DINNER. Read full book review here.

“VERDICT Real-life Edwardian personalities abound in this period historical, and the upstairs/downstairs focus delivers a clash of temperaments. This title is bound to appeal to fans of historicals set in this period and of such authors as Rhys Bowen and Ashley Weaver.” Library Journal for DEATH SITS DOWN TO DINNER

Order from book stores everywhere and online at:

Death of a Dishonorable Gentleman 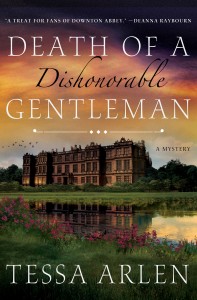 Lady Montfort has been planning her annual summer costume ball for months, and with scrupulous care. Pulling together the food, flowers and a thousand other details for one of the most significant social occasions of the year is her happily accepted responsibility. But when her husband’s degenerate nephew is found murdered, it’s more than the ball that is ruined. In fact, Lady Montfort fears that the official police enquiry, driven by petty snobbery and class prejudice, is pointing towards her son as a potential suspect.

Taking matters into her own hands, the rather over-imaginative countess enlists the help of her pragmatic housekeeper, Mrs. Jackson, to investigate the case, track down the women that vanished the night of the murder, and clear her son’s name. As the two women search for a runaway housemaid and a headstrong young woman, they unearth the hidden lives of Lady Montfort’s close friends, servants and family and discover the identity of a murderer hiding in plain sight.

In this enchanting debut sure to appeal to fans of Downton Abbey, Tessa Arlen draws readers into a world exclusively enjoyed by the rich, privileged classes and suffered by the men and women who serve them. Death of a Dishonorable Gentleman is an elegant mystery filled with intriguing characters and fascinating descriptions of Edwardian life—a superb treat for those who love British novels.

Praise for Death of a Dishonorable Gentleman

“Readers of this debut set in Edwardian England will feel as though they’ve stepped into an episode of Downton Abbey, complete with murder and intrigue upstairs and downstairs. . . . VERDICT Incorporating exquisite period detail into her well-mannered mystery, Arlen offers readers an engaging peek into the lives of upper and lower classes of early 1900s England combined with a little history interspersed. Historical mystery fans who want to know more about the period may wish to check out the author’s Redoubtable Edwardians blog (http://www.tessaarlen.com/blog-20th-century-redoubtables/), which features articles about some of the colorful eccentrics of the era.”  – Library Journal

“4 Stars… “A gruesome crime occurs on a wealthy estate in this debut mystery set in 1912 England. In a time period where social classes were distinct and separate, a countess and her housekeeper cross class boundaries to investigate a crime. Good plotting and characterization drive the story, which is enhanced with vivid details of the everyday life of the privileged classes and their servants.” RT Review

“Arlen conveys a genuine feel for Edwardian life in a grand manor house and takes the opportunity to exploit amusingly snobbish exchanges between the guests . . .  the murderer’s identity remained an enigma to me, and that’s surely the sign of a good mystery.” The Historical Novel Society

“Lively… Mystery fans eager for yet another look at the quasi-feudal system that prevailed in England before WWI will be most rewarded.”—Publishers Weekly’

“‘Death of a Dishonorable Gentleman’ is a romp through England’s estate rose gardens and great halls, village pubs, and underground train stations. Arlen invests this tale with cosmopolitan details and desperate actions — and manners that range from naughty to exquisite — upstairs, downstairs and behind doors.” Bellingham Herald – West Sound Press Read more here.

“Tessa Arlen has a worthy debut with Death of a Dishonorable Gentleman. With a deliciously gruesome murder and an unlikely pair of sleuths, this is a treat for fans of Downton Abbey who will want to devour it with a nice steaming pot of Earl Grey.” —New York Times bestselling author Deanna Raybourn

“Thoroughly enchanting. Arlen’s debut will appeal to fans of Downton Abbey, with its vivid descriptions, firm grip on the intricacies of the time period, and skilled portrayal of the often complicated relationship between upstairs and downstairs.” —Anna Lee Huber, author of the Lady Darby mystery series