Dame Nellie Melba and the Silver Voice with a Brass Tongue

At the name of Melba… crowned heads would nod respectful acknowledgment, noble lords and ladies would open their doors, newspaper editors would clear space for headlines, theatre managers would turn pale, and the house would be full. 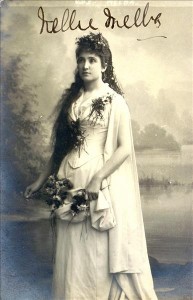 Her voice was pure and pitch perfect she never slid up to her High C but merely produced it with effortless spot-on perfection.  The Tsar paid tribute; Paris, Monte Carlo and Brussels were as crowns strewn in her path. Italy was duly impressed but could not quite warm to the lady, they felt that she could not act and her voice was too cold. Germany, where they were rather more musical, was not too keen at all – she did not have what it took for Wagner. 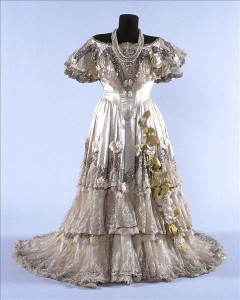 At Covent Garden, where space backstage was at a premium, a dressing-room marked ‘Melba’ was always exclusively hers. At the Metropolitan her name in the roll of honor led all the rest. Escoffier named a peach and ice-cream dessert, Peach Melba, in her honor for the Coronation year of 1911. 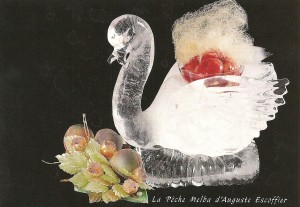 Peach Melba – Escoffier for the 1911 Coronation of George V

Nellie Melba was not only one of the greatest voices of the Golden Age she was its greatest personality. Quick witted, outspoken and unpredictable she held her ground at center stage against rival sopranos, male colleagues and conductors. The silvery quality of her voice was the legend of the era. For fifteen years on both sides of the turn of the century she was renowned as the world’s greatest soprano. So was her tongue. The public adored her, musicians tended not to, but they praised her. Her tempestuous relationship with Puccini made any rehearsal a nightmare. On one occasion after Puccini had made her re-sing an entire aria, he threw down his baton and shrieked: “No, no, no. You sing my music. You don’t sing Melba-Puccini.” They had to wait for several days before Melba would agree to continue with rehearsals. 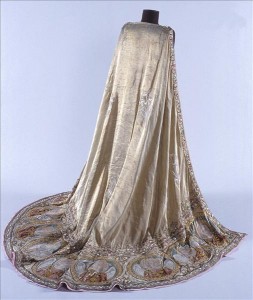 The cloak worn by Melba in Lohengrin 1920

“…the voice, pure and limpid, with an adorable timbre and perfect accuracy, emerges with the greatest ease.” Arthur Pougin, said of her in Paris. But she was so unspeakably rude to everyone that it took the intervention of Lady de Grey (later the Marchioness of Ripon) to prevent her from being fired from the opera house in Brussels and it was only with the support of the British nobility and particularly the Marchioness of Ripon that Melba made her break through to become a world superstar. 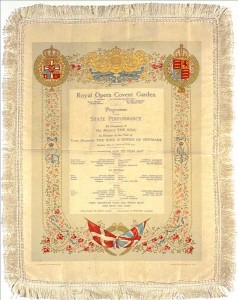 The more famous she became the more outrageous her behavior became. She insulted the press, journalists and anyone who disagreed with her, and got away with it. She invariably would finish her concerts with ‘Home, sweet home’, leaving everyone misty eyed and begging for more. And when it was announced (not before time, some thought) that the diva might soon retire to her native Australia, the editor of The Musical Times wrote under the headline THE DIVA TO GO HOME: ‘And by all means why not? As the Diva has melodiously declared (only too often), there’s no place like it.’