A Blog on Blighty

I have just finished the copyedit for DEATH OF AN UNSUNG HERO – Lady Montfort and Edith Jackson’s fourth adventure together which takes place at home in Blighty in 1916 as the Battle of the Somme raged on for most of that year. 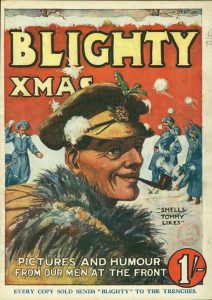 A Little Bit of British ‘Hewmah’ from the Front in 1915

My copy editor (who struggles to Americanize me) queried my use of the word ‘Blighty,’ a term I use quite naturally since I am English, but one that she thought American readers would not understand. I dutifully added context so that readers would understand that when we Brits say Blighty that this is our affectionate term for England.  And when we refer to’ a Blighty one ‘(which we now only do as a historical reference) we are talking about a combat wound bad enough for the sufferer to be sent back to England. Soldiers fighting in the trenches of France in WW1 sometimes shot themselves, usually in the foot, so that they could be sent home. Which gives you some idea of how desperate the poor devils must have been. 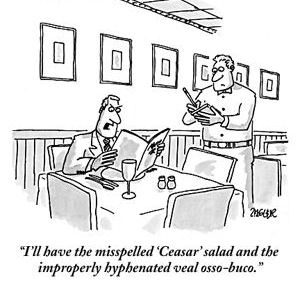 And then I realized that  I had no idea how we had come by this expression. I knew Blighty had always been soldiers’ slang popularized during the 1914- 1918 war. And I guessed that it came from soldiers serving in India as lot of our slang at that time came from corrupted Hindi pronunciation. So I did what any sensible person does when they want fuller understanding –I Googled. The BBC was able to give me the fullest possible answer and it is a good one. I have to say it took a lot of self-discipline for me not to cut and paste this explanation into a new ‘Comment’ in ‘Track Changes’ for my copy editor. (If you don’t know what Track Changes are then by all means feel free to use Google!)

“Homesickness can do funny things to people. It can create fierce patriotism where once there was just allegiance; it can create an idealized society in the mind, one in which no one is ever cruel or selfish or rude because that’s the society the homesick person wishes to return to; and it can distort language, so that emotive terms such as the name of home itself should be avoided in case of excessive lower-lip quiver. 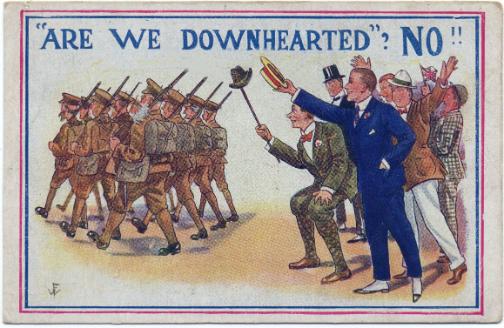 ‘Patriots’ sending the boys off to France in 1916

Blighty comes out of feelings like these. It’s an affectionate nickname for Britain (or more specifically England) taken from the height of the Victorian rule of India, that was first used in the Boer War in Africa, and popularized on the fields of Western Europe in the First World War.

The Oxford English Dictionary says that the word is a distortion of a distortion: the Urdu word ‘vilayati’ either means foreign, British, English or European, and it became a common term for European visitors to India during the 1800s. A mishearing changed the v to a b, and then ‘bilayati’ became Blighty, as a term to describe British imports from home, such as soda water.There again, it was also claimed by Rupert Graves that it derives from the Hindustani word for home: blitey. 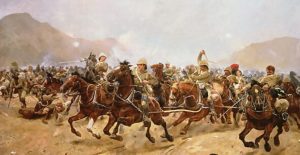 The British cavalry’s continual presence in India ended in 1947 when India became independent.

Having picked up some use during the Boer War (because nothing breeds in-jokes and slang like soldiers living and fighting in close proximity away from home), the term really took off during the long years of trench warfare in World War I. Soldiers would talk openly of dear old Blighty, indicating not only a longing to be away from some of the most horrific battlegrounds in human history, but also a wish to return to a time when such horrors were unthinkable. This elegiac tone was caught and carried by the War Poets: Siegfried Sassoon and Wilfred Owen, both of whom used the word when describing their experiences.” 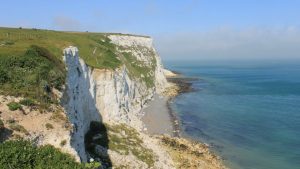 The White Cliffs of Dover were the first thing returning soldiers from France saw as they crossed the Channel from Boulogne. They epitome of Blighty!

The War Office soon picked up on this, releasing a free magazine for active servicemen called Blighty, which contained poems and stories and cartoons from men on the front line. Then there were slang terms like Blighty wound, an injury good enough to get a soldier sent home, but not life-threatening, as depicted in the 1916 Music Hall song “I’m Glad I’ve Got a Bit of a Blighty One” by Vesta Tilley.