The fictional village of Little Buffenden is home not only to Poppy Redfern and her grandparents, but the American Army Air Force in their new airfield built for them on Poppy’s grandfather’s farm Reaches. 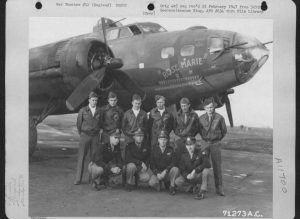 When America ‘joined the war’ after the Japanese raid on Pearl Harbor in December, 1941 the British War Office requisitioned land to build airfields for their new allies. In Little Buffenden what was known as the Friendly Invasion was greeted with mixed reviews.

In reality East Anglia was where most of the American bases were built and the arrival of the Yanks was greeted with enthusiasm. A population of women struggling with making do was treated to popcorn, hot dogs, the jitterbug and of course lipstick and nylons. 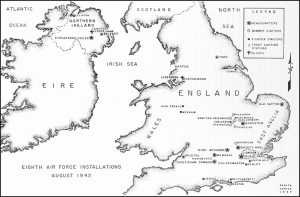 My mother was a middle-school girl when war broke out, and and eighteen when it ended. There were no Americans in her life: her father’s farm was close to Bletchley Park which is where she met my father.

The War Office did requisition some of her father’s land–two fields to be exact, and the British Army was bivouacked there off and on throughout the war. Rows of tents and a couple of Nissen huts housed about two-hundred and fifty soldiers at a time.

My grandfather was a sociable man and enjoyed chatting to the young men, but throughout the war years he had one pet peeve: the soldiers would squeeze through the thick hedge that separated their camp from his orchard when the apples were ripe and help themselves. 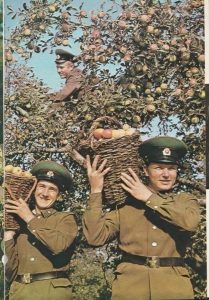 “What’s a few apples when those boys might never come back?” I can hear my grandmother saying. But to my granddad it was the principal of the thing. Scrumping as it is called in England is just a kind name for stealing.

His solution was a simple one. He moved his large and very aggressive gander, Bill, into the orchard. I seem to remember that Bill was an impressive goose: large, robust with a five foot wing span, and a nasty temper.

He ate a few windfalls, browsed on rich grass and seed heads and kept a baleful eye out for the first scrumper to squeeze through his hedge. Sometimes my grandfather would lean over the orchard gate with his pipe and keep Bill company as they waited together. 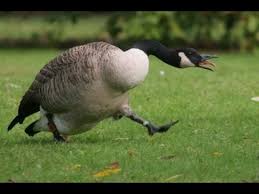 A Terrifying Gander on the Attack

A gander is a territorial creature. Give him exclusive domain over any area and he will make it his with a vengeance. The sight of Bill racing along the grass, his powerful beak wide open to show its serrated edges and his wings spread wide was a terrifying sight–and the sound of his hiss was louder and more intimidating than a King Cobra.

After the last soldier had raced across the orchard with Bill’s beak pecking at his bum granddad would wipe tears of laughter out of his eyes and tell the kids to gather a basket-full of apples and take them over to the commanding officer of the camp next door.