Bertie and the Entente Cordiale 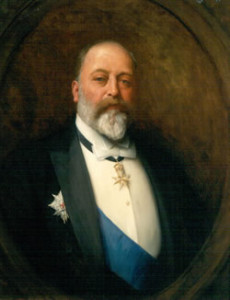 It seems only right that I kick off this blog with the greatest Edwardian of them all: King Edward VII or Bertie as he was known to his family.

There is no doubt at all that by today’s standards Bertie had a rotten childhood. His mother loathed the sight of him and continually decried his small head, large nose and pop eyes; it is said that we dislike in others what we are dissatisfied with in ourselves.  Bertie’s father, Prince Albert, that paragon of manhood whom Victoria’s children were quite clearly told they could never hope to measure up to, no matter how they tried, hovered anxiously over the boy never letting him alone. Bertie’s life was governed, examined, fussed over and cruelly criticized. Not known for his intellect Bertie’s parents zealously strove to correct this failing. He was so overworked in the classroom that he often quite simply fell apart, throwing massive temper tantrums and displaying over-sensitivity to disapproval, attracting even more parental criticism.

But we all have to get over our childhoods no matter how miserable and unfair they are. And to his credit The Prince of Wales became a delightful young man, both an excellent conversationalist and a good listener, fond of wine, cigars and female company. He remained, of course, a great disappointment to his parents as he never remotely measured up to his father. When Albert died of typhoid it was, unfortunately, at a time when he was in a fury with his son after the 19-year-old had been caught in bed with an actress. This gave Victoria the opportunity for a lifetime of recriminations against her son as she wholly blamed him for his father’s death.

The result of this parental mistrust was that the Prince of Wales spent large amounts of his time away from the center of government and as much time as he could abroad, in the fashionable spas of Marienbad, Baden-Baden and at casinos on the Riviera.  He particularly enjoyed Paris, and with his perfect French and easy manners was popular in salons and nightclubs alike. It might be thought that this hedonistic life might make him supremely unsuited to the role of monarch, but in fact when he assumed the throne at the age of fifty nine in 1901 it was with maturity, gentle humor and a determination to enjoy himself.

Anglo-French relations at this time were far from satisfactory, with points of conflict in Egypt, Morocco and Siam, and British contempt for French public life over the Dreyfus affair and French condemnation of the brutal conduct of the Boer war. The low point was reached when a French magazine published a cartoon of the aged queen bending over and showing her backside on which the image of the Prince of Wales appeared.

In the year following the accession of Edward VII, British and French statesmen padded around each other in the hope that disputes could be resolved. Edward provided an opening when he was in the Mediterranean in 1903 and heard that the French president, Emile Loubet, was visiting Algiers. As a pleasant gesture, Edward sent four battleships to salute the Frenchman who responded with delight, inviting the king to Paris.

The cabinet was against this trip, thinking that public reaction in the French capital would be too negative, but Edward insisted. He was right, almost overnight, the French crowds changed from sullen spectators with the occasional “Vive les Boers” to enthusiastic fans shouting “Vive notre roi”. Even republicans, it seemed, were suckers for a monarch.

The trip has been credited with creating the entente cordiale, but that is an exaggeration. Edward set the climate in which the British were prepared to trust the French, because their new king did so; and the French were prepared to trust the British if Edward was their representative. The fact the Edward was demonstrably against war is reflected in the words of a popular music hall song when he was king:

As long as there’s a King like good King Edward.

For ‘e ‘ates that sorta thing!

As long as we’ve a King like Good King Edward

So God Save the King.

This entry was posted in Royalty. Bookmark the permalink.